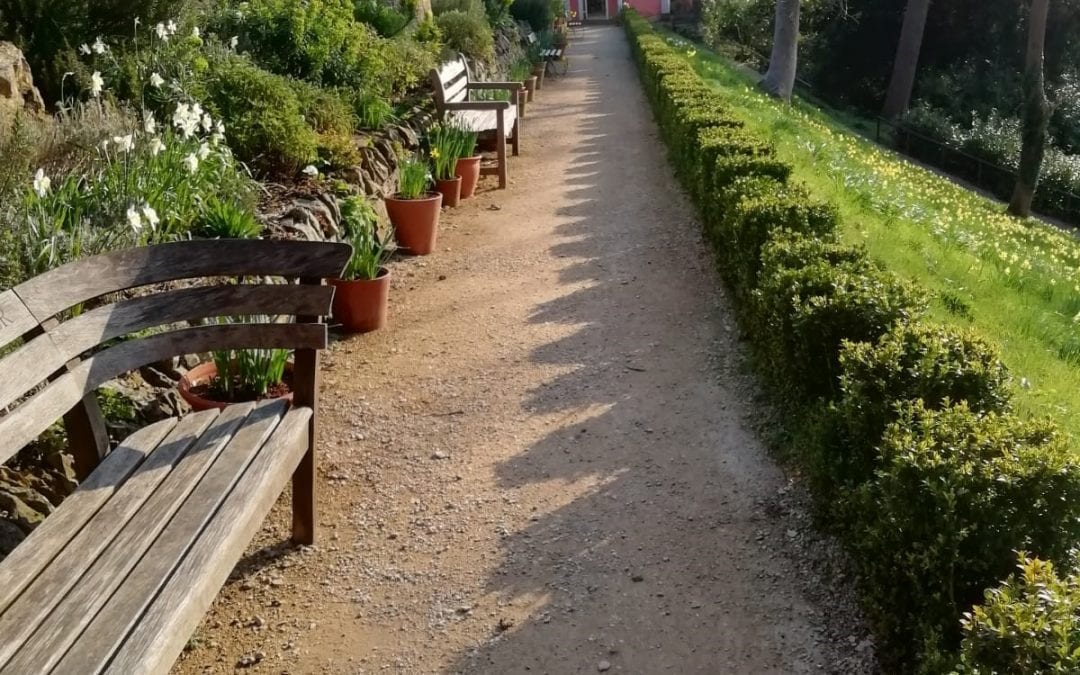 It has been a busy fortnight, with periods of increasing and unaccustomed solitude since we closed the gates to the Garden on 23 March. After our final weekend, we had a few days with the rest of the garden team before they were furloughed, so we were able to finish a few of the bigger, more physical tasks which had been started. This included completing a new fence on the boundary between the car park and the Coach Field, which required posts to be bashed in and wire fencing stretched between them. It was hard work but looks very smart now.

The Board of Trustees have agreed a plan which will see Head Gardener Roger staying on to keep on top of the essential maintenance in the Garden for the time being, with the aim of it being in a visit-able state as and when we are able to reopen. At this time of year, there is plenty to keep a whole team of gardeners busy (there are usually four plus a team of 24 volunteers!) so it is with some trepidation that we approach this task. However Roger has a very simple manifesto which revolves mowing, weeding, watering and strimming, and we think it might be just about doable.  As you will see from this shot, things are coming on nicely in the polytunnel:

This week has been cold and dry so it’s not been mowing weather, thankfully. That’s lucky, as our ride-on mower (nicknamed Gideon) has been struggling with the concept of hard work for a little while now.  Even Assistant Head Gardener Jasper’s recent coaxing couldn’t persuade it to finish its work.  And with typical poor timing, the drive band to the mower deck broke last week… but Roger ordered a spare and fitted it today and… Gideon rides again!

We’ve also taken delivery of 25 trees from the Stroud Valleys Project which were promised to us back in the autumn. There’s a nice selection of whitebeam, field maple and small-leaved lime which are replacing some of the trees we had to cut down in the Hidden Hollow this winter due to ash dieback. Roger has managed to plant all of these and install their (giant) tree guards which will protect them from nibbling predators. There has also been some pruning of the lavender and rosemary down in the Exedra Garden and planting out some of the daffs which were part of our plant sales stock. And Roger has also been grafting fruit trees, so we have some local varieties ready for sale later in the year. 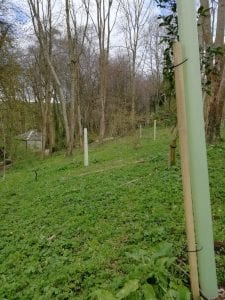 Down on the Bowling Green, Natasha Houseago’s “rococo lady” carving is now complete (click here to read her story) and Roger has successfully manoeuvred her to her final sitting place.  Seeing through her body is a bit of a disconcerting experience but the idea is that the hole frames a very lovely view – which indeed it does (not sure the picture below does this justice!) 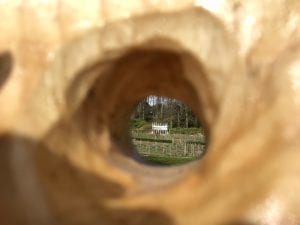 And finally, Roger reports that the ducks are settling in well into their temporary home in his garden, and enjoying his pond. Although they were probably a bit shaken up by the move and their surroundings are rather more confined than they are used to, they have managed to lay one egg so far.  They have been joined by Roger’s new dog, Charlie, a loveable golden retriever, who is also making himself very much at home in the gardeners’ shed. 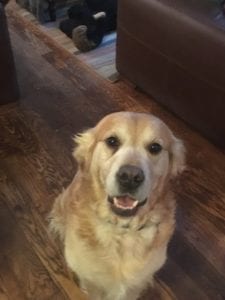 We continue to regularly review the position with regard to opening as the situation progresses. Please check back here for updates or follow us on social media (links via the bottom of our home page).  Rest assured that throughout the closure, our priority will be to look after the Garden for the future. To donate to support our charity, click here.